I am a resident in psychiatry at an academic medical center. My blog posts describe patient encounters I have had in the course of my training, both past and present. Every effort has been made to protect the privacy of these individuals. Names and identifying features have been changed. If you believe you have been a patient of mine and have concerns about the effects of this blog on the privacy of your medical record, please feel free to post a comment and I will be happy to withdraw any offending material.

Market competition is not going to fix US health care

Imagine you are getting your car serviced. You bring it to the shop, you get an estimate. When the work is done the shop presents you with a bill. It may be a little more or less than the estimate was, but either way that's what you'll be paying. Now imagine that instead of paying the bill as it's presented, you tell the shop: No, I don't think your work is worth this much. In fact I think it's only worth half this much, and that's what I'll pay. You pay half the bill and walk out, leaving the mechanic with his mouth open.

Sound out of line? This is exactly what happens every day to health care providers across the country. I recently made two visits to a specialty practice group at a large public academic hospital. Here are the services I received:

Don't forget all the overhead costs and behind-the-scenes work like maintaining the ultrasound, scheduling the appointments, dictating and transcribing the reports, discussing the case, etc.

The cost for all of this work was $994. I have to say this doesn't sound unreasonable to me, though perhaps others' views may differ.

In any other line of business you'd be stuck paying the sticker price, regardless of what you thought was fair. Only in health care does a third party get to decide what a provider's services are worth. The doctor or hospital can say ahead of time, we will work with Insurance Company A or we won't; but once they agree to work with that insurance company they are bound to accept whatever the insurance company decides is fair reimbursement.

This is just one of the many ways that the insurance system divorces the health care system from the competitive forces of the free market.

Here's another one to wrap your brain around: Basic market principles imply a cost for a product or service. The better your product or service, the more you can charge for it and (in a perfect world) the more money you make. Right? Not down the rabbit hole of health insurance. Insurance companies make money by *refusing* the service they ostensibly provide - payment for health care. The more claims they deny, the bigger their profit margin. This completely subverts the competition principles of the free market. It also results in insurance companies spending a lot of money to pay people who figure out how to deny claims. Hence (among other, more complex reasons) why private insurers in the US have three times the overhead of MediCare, which doesn't waste effort figuring out how to deny people's claims.

Check out also this comparison of overhead costs in the privatized US system versus the centralized Canadian system (Woolhandler et al., NEJM 349:768-775): 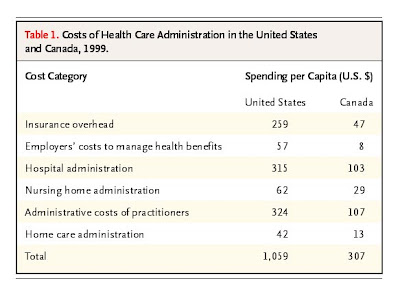 And hence why placing blind trust in the power of the free market is, at least in this instance, a terrible idea.


In fact, not only is the health insurance system divorced from the principles that make free markets successful, it's divorced from its own founding principle of spreading the risk.

The whole point of insurance is that you have a large number of people at risk for an adverse event. These people all pay into a pool that will cover the small number who actually experience the adverse event. Somehow insurers decided it was OK to start divvying people up into risk pools, so that people who are less at-risk pay less, and people who are more at-risk pay more (or are blocked from getting insurance entirely). Sounds reasonable at first, but it's a slippery slope. As we find out more about ways to predict risk, we can charge sick (or risky) people more and more and healthy (or low-risk) people less and less. Soon you have a system where all the sick people are blocked from participating, or are paying the costs of their own health care with no participation from the healthy community. That's not spreading the risk. You might as well just pull out your checkbook and pay your doctor his fee. Except then you wouldn't be generating profits for the insurance companies.

The only way health insurance is going to work is if we go back to the basics:
If you want to use a risk-spreading model, everybody needs to participate. Young, old, sick, well. No excluding people and no basing premiums on expensively-generated risk profiles. Practically, the only way I can see to do this is a single-payer system. Whether the government wants to do the job itself or contract out to a private company is its own business; but however it's done, everybody (or almost everybody) has got to be enrolled to make it work.

This is why the Obama-Biden health care plan is not going to work.

Obama wants to let people opt out of the national program if they like their own insurance - or if they are simply healthy and don't want to participate. In fact, with a guaranteed-issue plan available there is no reason to buy insurance until *after* you get sick. This would result in healthy people refusing to buy insurance, and the system cannot remain solvent without that crucial population of people who pay in more than they take out.

The good news is, if everyone is insured, and health care providers can be assured of getting paid in full every time they perform a service, then they won't need inflated sticker prices to cover all the nonpayers and underpayers.

If people want to yell "Socialist!" when they hear these arguments that's fine, but what are they going to do about maintaining solvency in the health care system? If you want to stick to your capitalist guns then your only viable option is laissez-faire, fee-for-service, truly free-market health care. (And if that's what you want you'd better be prepared to see a lot of poor people dying of treatable diseases.)

Because what we have now is not working, and for the reasons detailed above neither are any of the other half-cocked hybrid attempts to apply competitive market principles to a system that turns them on their heads.